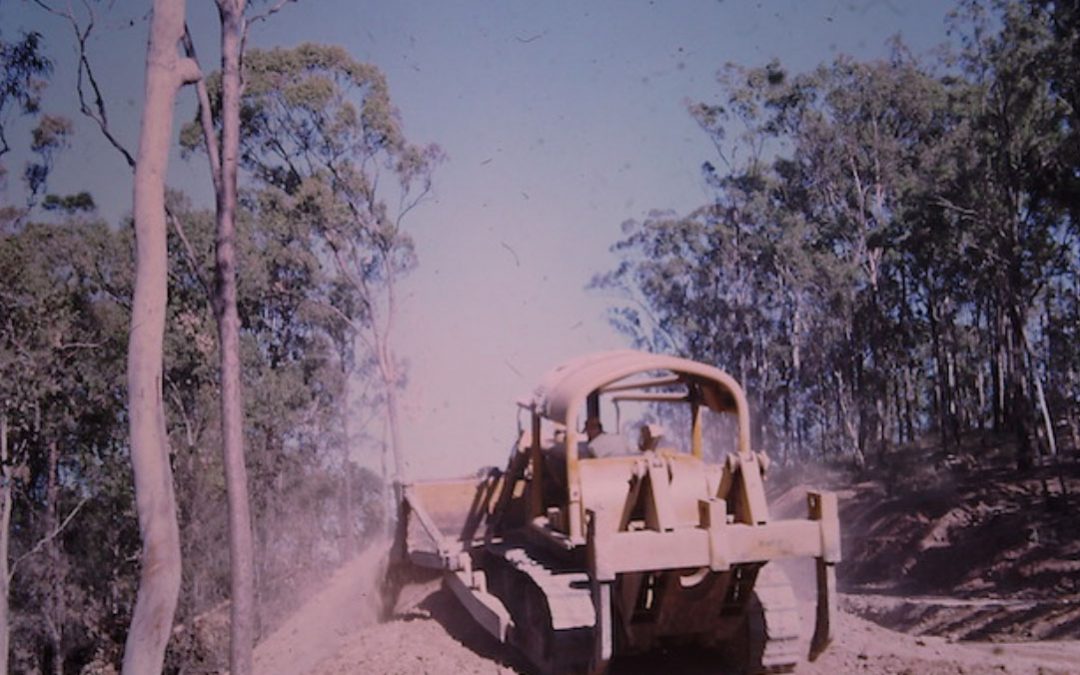 The following notes were written by Edmund Curtis in 1966,
concerning the construction of the Do-it-yourself Road.
Oxenford – Tamborine.
The following is a brief outline of an important and very necessary
work done by residents and others at great personal cost in money
and effort, to first show the need for a road to the coast on the east
side of Tamborine Mt and then to actually build it.
The story of it all is in reality many stories within one big story
dating back many years. From the earliest days of pioneering on
Tamborine Mt men have travelled the spur on the east side of the
mountain, this being a way to and from the Coomera valley and the
sea.
The Wongawallen range was the most common route as it was the
most direct, but the grades were much too steep for good access.
The St Bernards road was an alternative but it also was too steep.
Flood rains eroded the rough steep grades of both roads and the
pioneers work would always be worked away by the water running
down the wheel tracks.
These roads were traditionally travelled, abandoned, repaired and
in time became impassable again, but always traffic of some sort
continued.
The bullock wagon and snigging teams removing cedar and back to
the valley below, before land was selected on top of the mountain,
the pack and saddle horses and the horse drawn vehicles tediously
travelled up and down the mountain.
Then in 1958 the need for a good road to the coast and the
enthusiasm to build it returned and a few enterprising people set
the movement for a road off again, with residents and others
backing them. But now their effort was centred on a new route, now
known as the McDonald Road (a mis-spelling of McDonnell Ridge
Road).
This route was firmly established as the best one to accept, mainly
by the finding of a young surveyor Mr. James Blakey, an authorised
surveyor and by W. G. Upton a civil engineer. The best route having
been found the effort to build the road was intensified.
Many meetings were held, unbounded enthusiasm and success
followed.
Money was donated, a roadside stall to sell vegetables and Suit or
any of the many things donated, was started. A large sign was
erected, the “Do – it – yourself road” which advertised the effort, the
work continued and the much needed money was found.
B Geissmann grading the “Do-It-Yourself” Road
The bulldozers were provided at below cost. It took over three years
of work by a large organization of men and women to complete the road
and make it safe for traffic. Two bulldozers were used at a below cost price
to do the heavy work of earth removing and tree clearing over a distance of four miles.
Men gave their weekends and frequently during the week to work on the
road. Women worked at the selling stall and others provided and
made articles for sale.
Concrete drains were installed, fences erected, grades were struck,
work was done well and cheerfully.
A two lane bridge was erected with the help from Albert Shire
Council. Assistance from outside for and received, to consolidate
our work this was necessary and we gave our deep thanks, for we
knew that without assistance to have the work secure on land that
would become a gazetted road and even a main road our work
would all be futile indeed and finish in the same way as effort of
years gone by had finished.
Mr. Harrison ML. A.. Mr. M. Hinze chairman of Albert Shire Council,
Mr. J. Blakey surveyor, Mr(G) Upton civil engineer, the land owners,
Mr. F. Holmes, Mr.G.Thwaites, Mr. Currey who gave their land for
the road, all helped to make this enterprise possible.
Today the Main Roads Dept, have taken the road and are making
the “Do – it – yourself road” into a first class mountain road with a
wide bitumen seal surface well marked each side by white posts
with luminous facings.
The reward for the farsighted enthusiasts is truly very great. It is
indeed a pleasure to drive the road which leads to the sea through
beautiful forest country where excellent views are to be seen, and
the builders can feel pride in their effort. I know that their anxiety
and work of some years ago was not in vain.
It is worth recording a few things, of particular interest.
The timber clearing and earth removing was done by capable men
who gave their utmost of themselves and the machines.
The grading levels of the road was done not by engineers but local
people. One cutting, a carpenters level was used in place of a
clinometer.
Necessary equipment was lent and used by its owners to get the
work done.
The Progress Association with its great number of members always
backing the undertaking.
In conclusion it is perhaps much better to write this story without
naming any of the builders personally as without all help received
from so many the road could not have been accomplished — as it
is, we the people did it, and it is hoped it will be accepted in this
way.